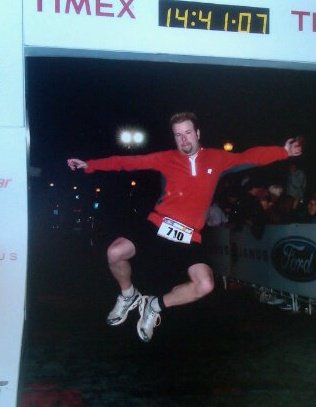 The other day, I talked about how diet and exercise aren’t opposite sides of a balance, that each has its own unique benefits to health.

Even if we’re ignoring all health ramifications beyond weight, most people are still unlikely to “win” the diet versus exercise game.

I’ve worked with a lot of people over time, both one-on-one mentoring, in classes, as well as just casual conversations, and by far, the most common reason given for not exercising is not having enough time.

But what about the athletes? The people who are already making time to exercise? Especially the ones who are training for endurance races and the like?

The Climbing Daddy was recently diagnosed with a fatty liver. The two most common causes of a fatty liver are too much alcohol and too much sugar.

The Climbing Daddy has also done a handful of IronMans. For those who don’t know, an IronMan is a triathlon where participants first swim 2.4 miles, then bike 112 miles, then run a marathon (26.2 miles). They have 17 hours to complete it.

He happened to be wearing his finisher’s jacket at his appointment with the gastroenterologist. She had something to say about that.

“You cannot fix this even if you run three IronMan races. You have to fix your diet.”

When I gave the class at our Wellness Expo regarding sugar (recap still to be posted), there was a woman in the class who wanted a way out and asked about mitigating the effects of a high-sugar diet with exercise.

No matter how much exercise you do, your body has to process what you eat.

You can’t outrun a bad diet.