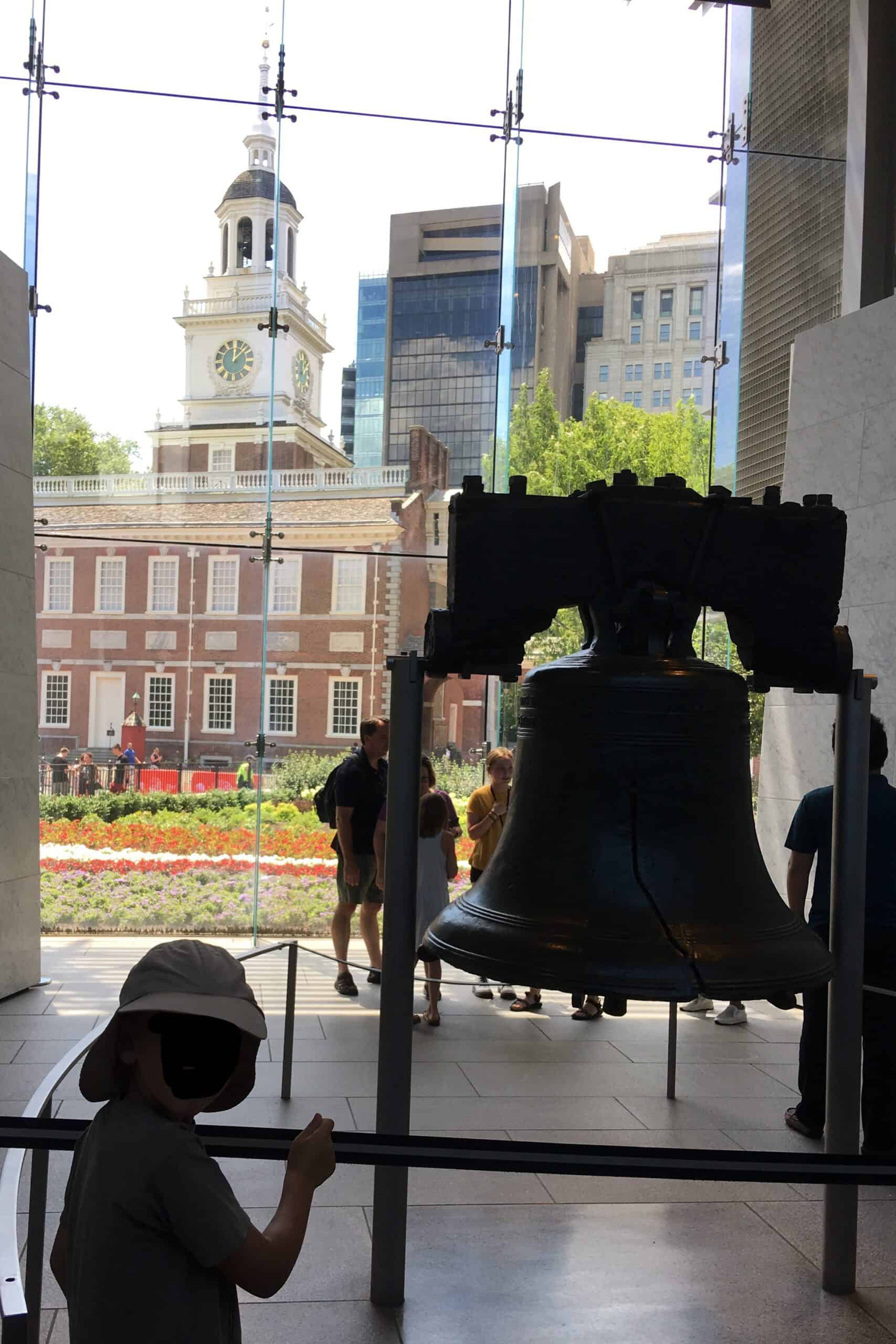 the quality or state of being free:

During our trip, we spent a just few hours in Philadelphia. We’d hoped to go to Independence Hall. It was sold out for the day, but we did get to see the Liberty Bell.

As I recall, when I was a kid, the bell was just kind of there, in a tiny building that you could just walk into. Now there are long lines outside of a large building full of history.

I’ll be honest: while The Kid and The Climbing Daddy were excited about going to see the Liberty, Bell, I wasn’t. But I learned some interesting things about it. Did I learn them before and forget them? Or did I not learn them before?

First, while we were waiting in line, I saw this quote engraved on the side of a building across the way:

Happily, the Government of the United States … gives to bigotry no sanction, to persecution no assistance.

As we looked to that building in the distance, in front of us was a memorial to slaves, along with a less sugar-coated telling of their history than we were fed as kids.

The juxtaposition was jarring and sad. Our blindness to our mistreatment of others goes back to our earliest days. It’s embedded in our roots.

Sorry, George. You did some amazing things, and for those, you deserve credit and praise. But we have always sanctioned bigotry and assisted persecution (you owned slaves! your wife couldn’t vote or own land!) and continue to do so today.

As we continued into the building (hooray for climate control!), we read about the history of the bell, saw photos of xrays of it, saw tchotchktes of it.

Until the 1830s, it was the State House Bell. (All further quotes are from the exhibits in the Liberty Bell Center.)

Abolitionists in the 1830s gave the State House Bell a new name, Liberty Bell, recognizing the contradiction between the ideals of the Revolution and the reality of more than four million enslaved people.

I had no idea! People who realized we could do better renamed this icon. Its only name most of us know was assigned as part of the abolitionist movement! (I suspect there are people today who would insist it have its name returned to the State House Bell if they knew…)

Sadly, while slavery was ended, liberty is hardly what black folks enjoyed.

Following the Civil War, the Liberty Bell became a symbol of national reunification at the same time that civil rights were systematically denied to people based on the color of their skin.

The portion of the placard under that quote went on to clarify that “national reunification” was from a white perspective.

As the Liberty Bell increased in popularity as a symbol of freedom and liberty for white Americans during the last quarter of the nineteenth century, it contrasted with the unrealized ideals of African Americans, Native Americans, other ethnic groups and women. While the Bell traveled the nation as a symbol of liberty, intermittent race riots, lynchings, and Indian wars presented an alternative picture of freedom denied.

The rising tide raises all boats.

0 thoughts on “The Liberty Bell”