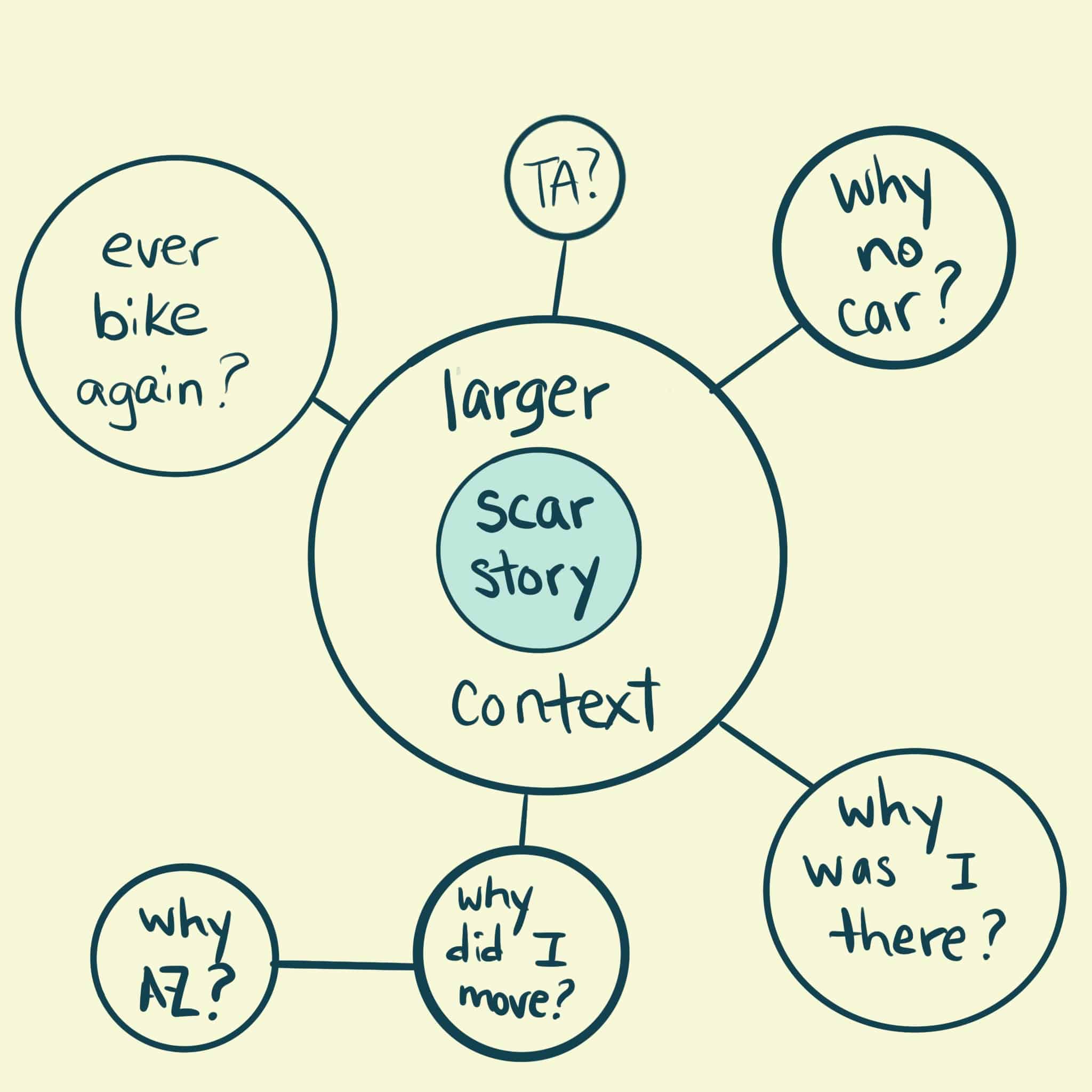 Running stone steps with tired legs, I fell and split open my knee, or just below my knee.

As part of the assessment as to whether or not it needed stitches, I was told that it would probably leave less or no scar if it received formal medical attention.

That’s not really important to me on that part of my body. (I think only a scar on my face would really bother me. Not entirely sure.)

This particular scar, when this wound grows up to be a scar, will be maybe seven inches above a scar on my shin from a bike accident years ago.

Each one has a story, and each story has a life context. It has a sort of bubble map around it.

For example, my biking scar:

The basic story of the scar: I was biking on a busy road at a busy time and a driver didn’t see me and stepped on the gas to make a left into a parking lot. I swerved so as not to be hit and in the process hit a sign and flipped over the handlebars. My best guess is that the pedal took a chunk out of my leg, deep enough to require two layers of stitches. Still better than being hit by the SUV.

Concentric circle around that: It was in late April the first year I lived here. I didn’t have a car and biked everywhere. I was biking from my boyfriend’s house to the university where I was in grad school and had a backpack full of stuff on my back. My laptop didn’t sustain any damage. I missed the last meeting of the semester with the professor of my assistanceship. This is why we wear helmets when we ride—I’d have bigger problems if I’d made that flip without a helmet on.

• Why didn’t I have a car? I had just moved to Arizona from New Jersey without a car. I had planned to drive my car and have it with me, but 36 hours before I was scheduled to leave, I was rear-ended by someone in a U-Haul who didn’t understand stopping distance with a heavy truck, and my trunk was left unusable. That wasn’t going to work getting me and my carful of stuff across the country, so I left the car, drove a rental, and didn’t replace the car for 18 months after arriving.

• Why was I in that spot at that time? I wouldn’t have been on that stretch of road at that time of day if I’d been going to campus from home, but I’d been at the guy’s house.

• Why had I moved? My move was to to go to grad school. I wanted to do grad school, but after seeing my teaching colleagues teach all day and do school all night for years, I decided that work and school were going to be separate endeavors.

• Why Arizona? I wanted to go somewhere hot and far away, and the largest Arizona Universities had the programs I was looking for.

• I was a TA for a class that I was not the best-qualified for, but they were short TAs in another department and I came recommended from another professor and did a good-enough job. Sitting on the sidewalk bleeding, I called the professor to tell her I was going to miss the meeting. She never got back to me and I never had contact with her again.

• I had no car and was back on my bike before the stitches were out. Fortunately, it was a Friday morning so I had the weekend to heal a little before needing to get back to campus for class.

I’m inspired by this menagerie of thoughts and would like to collect stories of scars. If you have a scar, it has a story, and I’d like to hear it and write about it. Contact me to set something up.