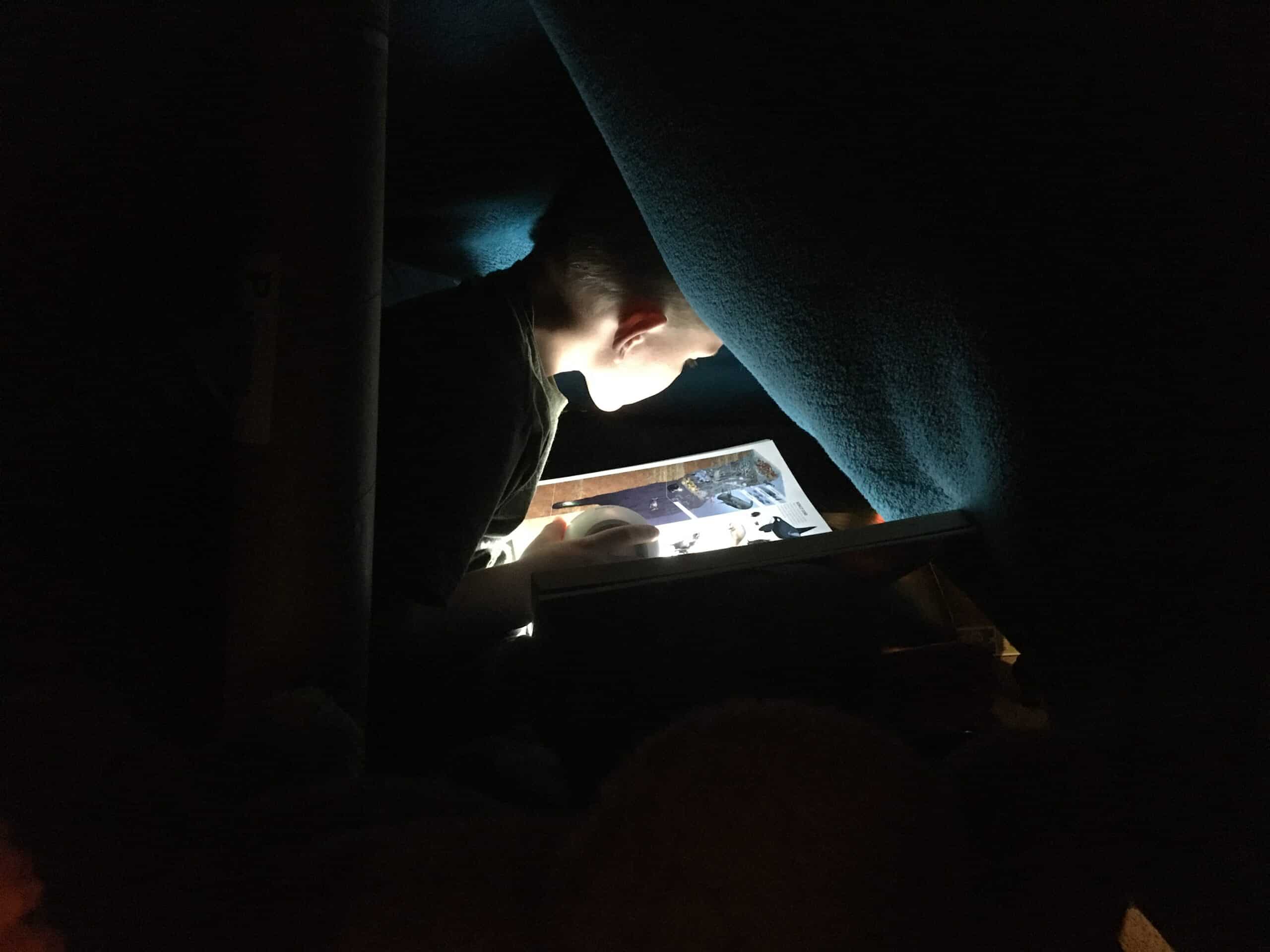 Disclaimer: This is not meant to tell you what to do. Our situations might be entirely different. This is just what we’re doing that’s working (or that we tried that didn’t work). Take what resonates. Modify what almost resonates. Leave the rest.

Well … I have the advantage that my working from home is very flexible. This gives me the space to help The Kid with his life in a fairly hands-on way.

We’ve known for a long time that he doesn’t do well unscheduled. So we made a schedule immediately, even though there was no school stuff yet. It wasn’t rigid, and it included lots of things: meals, snacks, exercise, play, math/ELA/science, Spanish, music, creative, mindfulness, chores, kitchen skills. Within those categories, he had a lot of flexibility.

Bedtime got wonky which made wake up time wonky, and the schedule fell apart. So this is what we’re doing now (the last two weeks) and it’s been working well. (If it stops working well, we’ll go back to a more structured schedule.)

We made a list of All The Things. It currently includes: math, reading, writing, science, creative, Spanish, music, exercise, chores, kitchen skills, typing, mindfulness. I need to add playdate.

It’s in a picture frame; you can use dry erase markers on glass the same as you can on a white board. Because he has school work now, and because that list is pretty extensive, we agreed that over the course of two days, we’d hit on all the things. He uses a dry erase marker to mark the ones he’s done, and we reset it every other day.

It’s not a perfect system, and it’s working. Some things he does more than every other day (he reads nearly daily, for example), and that works. It allows us to make sure things aren’t falling through the cracks.

I have a little white board that I brought home from work. (If I didn’t have this, I would use another picture frame with blank paper inside for a clean background.) Each day, I put the full date on it and make a list of things to do that day.

For example, today, he has a live lesson, so I wrote the subject and the time. Otherwise, today is Day 1 of the two days on his list, so he can do pretty much whatever. He has school work to work on, so I just put “school work.”

He is stressed about his school work. (Because he has at least a couple of days to complete each, his list of assignments feels long.) We printed an April calendar, and as he receives assignments, I write them on the due date. (His writing is not small enough to do this task.) He’s able to look at it when he’s going to work on the more generic “school work,” see what needs to be done, and work on it. I am helping him with this.

(He’s still a little freaked out by assignments on the calendar, but we’re talking about spreading out work on a project so it’s not overwhelming. Life skills right here. Hopefully also helping me hone this skill for myself…)

We have been getting school work all done in the mornings, so afternoons and evenings, we can do fun stuff. Or chores. But either way, not school.

What else is helping?

He had a half hour live lesson yesterday morning. During it, they had a few minutes to go collect some materials that he already had with him. He took those few minutes to jump on his trampoline, and he was in much better shape for learning when he returned to the computer.

When he started to frustrate with his writing assignment, I suggested he leave it for tomorrow (it’s due the end of next week) and go play outside for a few minutes.

Getting out of the house is so important (for all of us—not just the kids!). We’re fortunate for now to live in a location where the weather is nice almost all the time. (Talk to me again in two months…) We’re also fortunately to be in a house with a yard. He can go out back and play. And run around. Which brings us to…

Normally, he would have recess at school to run around and play. He would have time after school. He would, on some days, have taekwondo.

And while he does go outside and play, it’s not the same without other kids to run with.

We’ve done a few things to help him to move more.

One: he either takes a walk or a bike ride every afternoon with The Tall Daddy.

Two: While I’m not usually a fan of virtual races, we registered for a virtual 5K. This one has a medal that I thought was excellent, and it supports the National Parks. He could only register (and get a medal) also if he agreed to train. So on several of my solo afternoon walks around the neighborhood, I’ve mapped out routes that are at or a little over 5K. I showed him the maps, he chose one, and we’ve been running parts of it. Will piece it together in the couple of weeks we have left. (You can join here, if you care to. I don’t get any kickbacks, I just like the organization…and the medal.)

Three: on nights we don’t run, the three of us lift weights, go for a walk, or take a bike ride. His longest ride so far was six miles.

So he’s getting out to play in the morning, out with The Tall Daddy in the afternoon, out with us in the evening. And, as always, there is the trampoline in the living room. And I often agree to requests to wrestle. It’s not as good as playing with friends, but it’ll do.

He has been using the Marco Polo app to keep in touch with a few friends. We have had virtual playdates with friends via FaceTime. He’s played Battleship and Guess Who and has just talked and fooled around and been silly.

He’s learning how to play trumpet, because I am able to teach him and have an instrument available. I don’t know or care if he’ll still want to play when life returns to normal.

We have some toys and things in the closet, picked up on impulse and saved for a proverbial rainy day. It’s proverbially raining.

We’re baking things that we never bake. Bread. Cookies. Pretzels. He was astounded that I bought sugar.

There’s an overwhelming number of resources of things to do available online. We’ve chosen a few.

He and The Climbing Daddy built a table.

We have books and toys and activity things that he’s had and not looked at in a long time. Those things are coming into the rotation. (And the ones that still aren’t interesting are going into the donation box.)

With The Climbing Daddy working from home, he’s taken over the office. My computer is now in the living room. The house is out of whack. In order to have my work and his school all in the living room, we need to be organized and tidy. If it was a mess, it would be stressful. So his school things have a place. My school things have a place. Things get put away right after we use them so we aren’t moving around in clutter. While that is always what we do in theory, in practice, it’s more hard core right now. The living room must.stay.neat.

That said, he built a fort out of a sheet and the couch. It has stayed up for a week or more now, and it’s OK. We have other places to sit, and he likes to go in there and do his work or play or send Polos. He’s been sleeping in there most nights. It’s working.

What’s working for you?