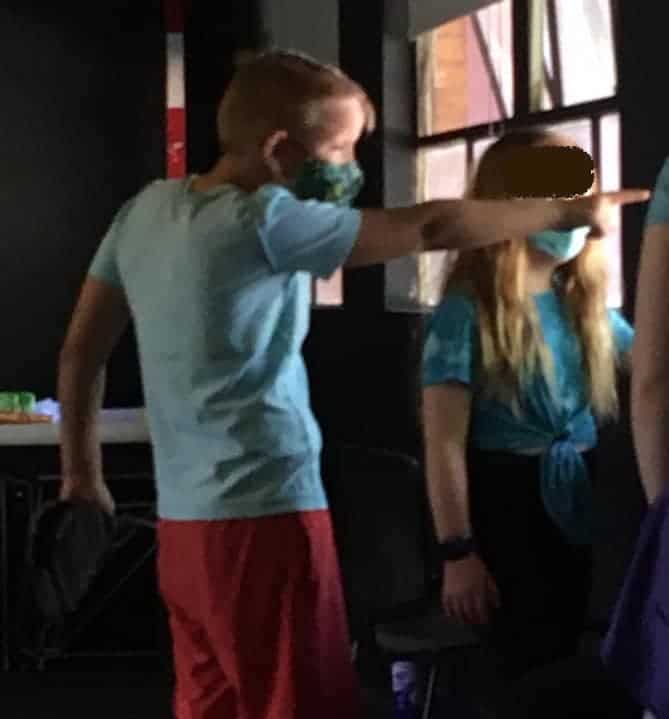 Rocket Kid did some week-long theatre day camps over the summer, each of which ended with a performance in their classroom.

Classes were small, and the teachers held the performance until each child had someone in the audience to see them.

Due to COVID mitigation strategies, each child was permitted two audience members. Chairs were set in pairs, spaced apart, one pair for each child. It was easy to see when all children were accounted for.

Five minutes after the scheduled start time, one pair of chairs was empty.

The kids all knew whose parents were missing, and soon the rest of us did, too, because she was sitting on the floor in tears.

When a car drove by, Rocket Kid, the self-appointed lookout, would point and be excited … and then it continued past.

Fourteen minutes. They walked in. (They had parked down the street.) Her demeanor changed completely. She got hugs from the empathetic kids, and the show began.

They always cared. They didn’t always admit they were hurt. My heart always broke.

Our concerts were always short—never more than half an hour, and sometimes only 15 minutes. Every time, at least one child would get dropped off then picked up 15 minutes later.

I can give that child all the lovin’ possible—it fills a different cup and can’t make up for their parents’ disinterest.

I still remember with overwhelming gratitude the teachers who gave me all the lovin’ possible. And I’ve gone to therapy for my parents’ disinterest.

Supporting kids and the things they’re excited about is important. They need to know that they matter, their ideas matter. Not that they’re the sun with all that orbits around them, and not that every idea that pops into their head is golden. But if they’ve put time and effort and vulnerability into something, it deserves some attention.

The mindset that the parent paid for the activity and that should be enough and the kid should be grateful is offputting and disheartening. Yes, of course gratitude is appropriate.* But so is interest in the results. What did they do, what did they learn, who did they become? They’re not the same child who went in to the activity. Experiences change us, for better or for worse, as children and as adults.

Which is to say—this reaches beyond children.

Everyone wants to be heard.

After the recording has stopped for a podcast interview, the most common comment I’ve received is, “Thank you for listening to me.”

Everyone has something they’re excited about, whether it’s a video they saw this afternoon or something they needed and found a great deal on or a hobby they’ve picked up or something they had success on at work or progress on a lifelong dream. It’s always more fulfiling to have people to share your excitement with, and it builds connection between people to experience that together, even if from different vantage points.

I’m not saying that you ought to listen to every person’s every thing. But showing up for your kids, your spouse, your friends, your colleagues means something. (And if it turns out not to mean something for those people, stop doing it. Or maybe ask why and be open to the answer. Could be about you. Could be about them. Could be they don’t know.)

The show must go on, but without the right people in the audience, it’s just not as good.

Oh, and one more thing—be excited. Find the people who will be your audience. Or your partners. It’s worth the vulnerabilty.