October and November hold quite a few anniversaries for me: my birthday and The Kid’s birthday. Getting National Board Certified. Finishing chemo.

Today is none of those.

Not all of them have been my best work, but I think that’s within the realm of reasonable.

It feels good to have made it this long. I recommend trying it. (If you do, let me know!)

Of course, once I hit “publish,” the last square on that year (in the photo) will fill in.

Getting followers was not my goal, but as you started to trickle in and accumulate, I started to notice. I was hoping to hit an even 100 followers by today and thought I had 97, but when I went into stats areas I don’t typically go (looking for something else), I noticed that email subscribers are counted separately. 100 followers!

In chronological order, here are my posts from the last year with the most likes. (They’re set to open in new tabs.)

Update: accountability to self

It’s normal. But is it good?

Do something for you

Go get what you deserve

Junk on vacation: how I managed it

Standards and accountability and homework

Making just a little time to let yourself feel better

The hidden side of … everyone

As I mentioned a couple of months ago, I’m going to cut down to three or four posts per week so I can dedicate more time to working on my book. I foresee returning to daily posting once that writing project is complete.

Thanks for reading, for liking, for commenting. I appreciate the interaction. I hope I’ve made a positive impact on your life in this journey.

I like to been seen. So do you. Might be in totally different ways or contexts or audiences, but we all want to be seen, understood.

As a kid, I was introverted and socially anxious, good academically, and eager to please. In elementary school, I more or less spoke when spoken to. I remember clearly getting in trouble for blurting out an answer once in fourth grade, and while I can’t say for sure that’s the only time it happened, it was rare enough that that once sticks out.

I was “seen” by doing my work well on time. A sticker or a pat on the back. Because that’s good enough at that level and that was enough.

As school got harder, I found a niche and a family in performing arts. I was never great at any of it, but I was dependable, and for what we were, that was enough.

And then we all grew up and life went in planned and unplanned ways, and some combination of social struggles (in part because of childhood emotional trauma, in part because we societally don’t value introverts), and “good enough” and “dependable” not being enough to be seen, and choosing a career path (teaching) that’s considered “less than,” and within that choosing a specialization (band) that is constantly fighting for time, students, space, validation, I’ve spent a lot of time feeling … invisible.

All this to say that this is why I have a stormy swirl of emotions regarding birthdays (and now also Mother’s Day).

Because I want to be seen. And if the anniversary of being born is a socially acceptable day to get positive attention, I’ll take it.

But we’re adults and I’ve certainly heard enough times to grow up, that birthdays are for kids (with the possible exception of milestone birthdays, though their importance is pretty random unless you’re becoming eligible or ineligible for something legally).

Birthdays always runs into gifts, and I’ve written about gifts before.

I don’t like obligatory, “I have to have something to give you” gifts. But I love gifts that are thoughtful. A couple of years ago, The Climbing Daddy threw a surprise party. A few people brought gifts: a stainless steel water bottle; a bag for dance shoes; a vegetarian cookbook for backpacking (or camping) and a gift card for REI; a pair of earrings from a friend who always picks out the best earrings. (Others, but that’s enough to make the point.) They are really different things, and they all say HEAT all over them. Having the party in the first place was amazing enough. Gifts that say “I see you, I know you” were icing on the proverbial cake.

Every time we go hiking, there are full dog poop bags on or near the trail.

You’re missing the point. Take it out with you. Leave everything the way you found it (or better).

Don’t be that guy.

As a bonus example, a patron at an Indian restaurant was arguing with the waiter about whether or not the establishment had soy sauce on the premises. She wanted some extra, and he said they don’t have any. She disagreed, saying there was some in her dish. He insisted that they don’t cook with soy sauce.

Don’t be that guy. 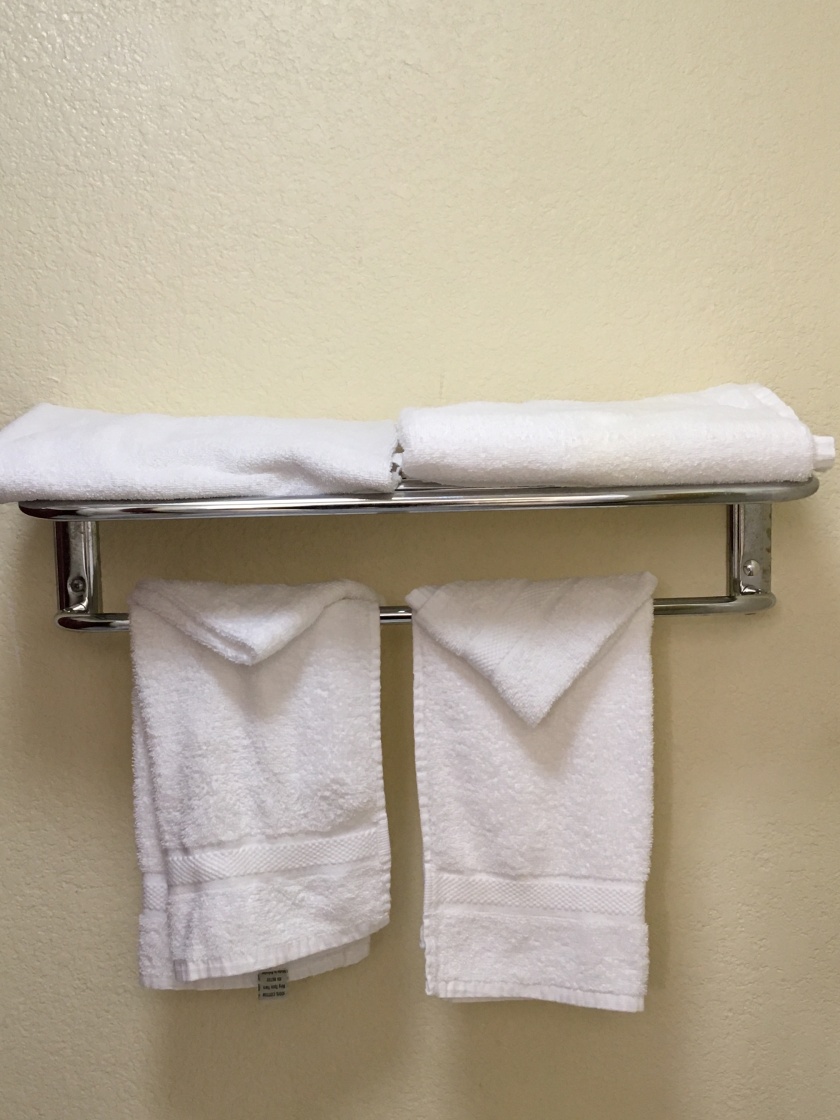 I know this has 8 tons of application in computer/tablet/phone software, but that’s not where I’m going today.

The lead photo is from our bathroom at a hotel we stayed at in California over the weekend. Two bath towels had already been used, so at presentation, there would have been four towels up there. Under the sink, there were two more full sets of towels available.

There were no hooks. Literally zero. Not on the walls, not on the back of the bathroom door, not near the shower, not near the sink. (I feel like this paragraph isn’t too many tweaks away from being Seuss-ish.)

That bar, where the hand towels and washcloths are, was the only place supplied to hang any wet towels.

Are people so gross that they don’t hang up wet towels?

Are people so [I don’t know what adjective] that they pull hooks out of the walls?

While this hotel was worse in this regard than most I’ve stayed at, I think maybe one ever had enough hooks or bars or anything for all the wet towels.

It wasn’t a high-end hotel. Was it just so cheap that they didn’t want to install hooks for wet towels? Did they used to have hooks but over time or with [undescribed] people, the hooks were removed and never replaced? Is it a design or a maintenance issue?

Maybe I hate it because I’m not good at it.

But where does one go to get feedback or training on title-writing?

The only training I’ve had has talked about titles as a means of getting clicks (“Use numbers! Five ways to write great headlines!”), and I guess that’s part of it, but really, I just want a solid title that piques curiosity in people who sift past clickbait.

I’m not selling anything (including ads, etc.), so it’s just a matter of sharing. I take time to write, I think it’s generally interesting, and I’d like people to read (and maybe reply! I’d love to be able to spark conversations!).

Thousands of people? Not necessarily. (That feels stressful, but maybe it would be OK.)

Only my biggest fans are going to click through and read if the title is crap.

It’s like when Dustin Hoffman realized that he had been dismissing potentially interesting women because of how they looked. (See that interview clip here.)

So. As with many things, I do my best, and people click or they don’t, and on we go.